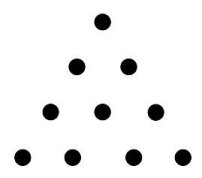 It is as if we were confronted with a pre-existent ground plan, a kind of Pythoagorean tetractys. I have frequently observed the number 4 in this connection. It probably explains the universal incidence and magical significance of the cross or the circle divided into four. C.G. Jung

Jung said that he studied and worked with 64,000 dreams (and many dreamers) before he began to venture into interpretation of dreams in a more general way. He noted the recurring themes and patterns, and, particularly for our interests, the prevalence of powerful geometric mandala designs that he encountered frequently in dreams. He felt the dream mandala was an archetypal representation of the self. And he noted that there was a “clear insistence” in the dream on the four-rayed mandala, what he called the “quaternity.” Said Jung, “”¦the phenomenon of four is a spontaneous product of the objective psyche.”

I like the term “objective psyche.” It implies a consciousness beyond but not separate from our individual psyche, a consciousness that contains universal information accessible to all, shaping all, common to all. Jung recognized the existence of the mandala in the objective psyche, with its power to manifest order from chaos. Edward F. Edinger, author of Ego and Archetype, says: “Quaternity mandala images emerge in times of psychic turmoil and convey a sense of stability and rest. The image of the fourfold nature of the psyche provides stabilizing orientation.” It is an archetype of wholeness.

So, from this perspective we see once again that when we work with the four Diamond Points and the energetic pattern, or mandala, that the points evoke in the energy field around the physical body, we are working with stability, orientation in time and space for the physical being, and an archetype of wholeness. The four Diamond Points form a classic archetypal “quaternity.” Jung also said of mandala that it represents the path to the “centre” or self, and is a key to the process of individuation. He notes that working with mandala brings a new kind of centering. I can see a resonance here with the qualities of the Diamond Points: we connect with the underlying Order of Source, which brings Balance and Grounding to the individual body/psyche. The activation of the information of the mandala brings Transformation ”“ what Jung refers to as a new kind of centering.

If we add the four Golden Rectangle Points to the mandala of the Diamond Points we have a double quaternity. According to Jung, “the double quaternity”¦ stands for the totality, that which is at once heavenly and earthly, spiritual and corporeal.” What we know about the Golden Rectangle Points from the SourcePoint perspective is that they help to further ground the information of the Blueprint in the material plane and the physical body, enhancing the connection that happens with the Diamond Points.

Jung speaks of the Pythagorean tetractys. The number 4 was considered by the Pythagoreans to be the primal number, the root of all things, the most perfect number.

If I allow my imagination to take flight, which it loves to do, encouraged by Einstein’s saying “Imagination is more important than knowledge,” I can imagine a relationship to SourcePoint here. I can wonder, would Pythagoras place the Blueprint in the third row, perhaps? Or does the BluePrint manifest from point to line to plane? And ultimately to the three dimensions through the four Diamond Points?

We weren’t thinking of any of this when we first discovered the Diamond Points. They simply revealed themselves, and we began to work with them, and they demonstrated their power. Now I find it interesting to discover resonances and correspondences in the “objective psyche.” That journey has taken me from Jung to Pythagoras this week, deeper into the quaternity. And, as the Pythagoreans used to pray:

“Bless us, divine number, thou who generated gods and men! O holy, holy Tetractys, thou that containest the root and source of the eternally flowing creation!

Sources for this article, unless otherwise noted: The Portable Jung, edited by Joseph Campbell

Connecting with Your Deep Intention Beauty Scroll to top