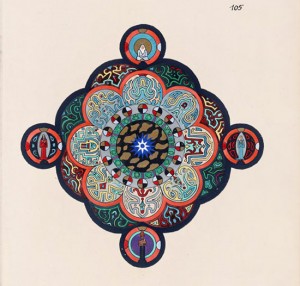 From TheRed Book by C.G. Jung

“Only when I began to paint the mandalas did I see that all the paths I took, all the steps I made, all led back to the one point, that is, to the centre. The mandala became the expression of all paths.” C.G. Jung

From 1913 to 1930 Jung undertook his now almost mythological “confrontation with the unconscious” as recorded in the recently released Red Book. He said of this period:

“The years”¦when I pursued the inner images were the most important of my life. Everything else derived from this”¦ Everything later was merely the outer classification, the scientific elaboration and the integration into life. But the numinous beginning, which contained everything, was then.”

Much of the information that was given to Jung at this time came to him as mandala. For example, during World War I, in a concentrated period in 1915, he drew 27 mandalas with pencil, one a day. He said:

“Only now did I gradually come to realize what the mandala really is: ”˜Formation, transformation, the eternal mind’s eternal recreation.’ And that is the self, the wholeness of the personality, which when everything is well, is harmonious, but which can bear no self-deception. My mandala images were cryptograms on the state of my self, which were delivered to me each day.”

The quote “Formation, transformation, the eternal mind’s eternal recreation,” is from Goethe’s Faust. This is mandala, this is the nature of the self, and this describes perfectly the process of the Blueprint. The information the Blueprint contains gives rise to life: formation. As we connect with it through the Points we bring in the information needed at that moment to bring balance, order, harmony and flow to the unique individual we are working with: transformation. As Jung said of mandala, the Blueprint is like a cryptogram on the state of the self, delivered every time we connect with it.

From Jung’s perspective, then, we could say that the Blueprint is the archetypal mandala that contains the specific information of the complete human. It is a basic premise of the Jungian approach that the archetypes of the collective unconscious contain vast healing power and specific information for us as individuals. SourcePoint can be seen as another way of tapping that resource.

In the coming weeks we’ll explore further the nature and power of the archetype, its significance for us in SourcePoint, and how Jung can help us understand what is meant when we speak of the Mandala Realm. Next week, we’ll look at the power of what Jung calls “the quaternity,” the recurring theme of the four-rayed mandala. Of course, I think immediately of the Diamond Points.

For now I leave you with a slightly gender-adjusted quote from Jung’s Red Book, a little gift for the upcoming Solstice (which, if you aren’t already aware of this, is also a full moon and lunar eclipse. A power point”¦)

Those who comprehend the darkness in themselves, to them the light is near.

(Sources for this post include The Red Book, C.G. Jung; The Gnostic Jung and the Seven Sermons to the Dead, Stephan A. Hoeller; The Portable Jung, edited by Joseph Campbell)

The Blueprint by Any Other Name…. Winter Solstice Meditation (audio)
Scroll to top